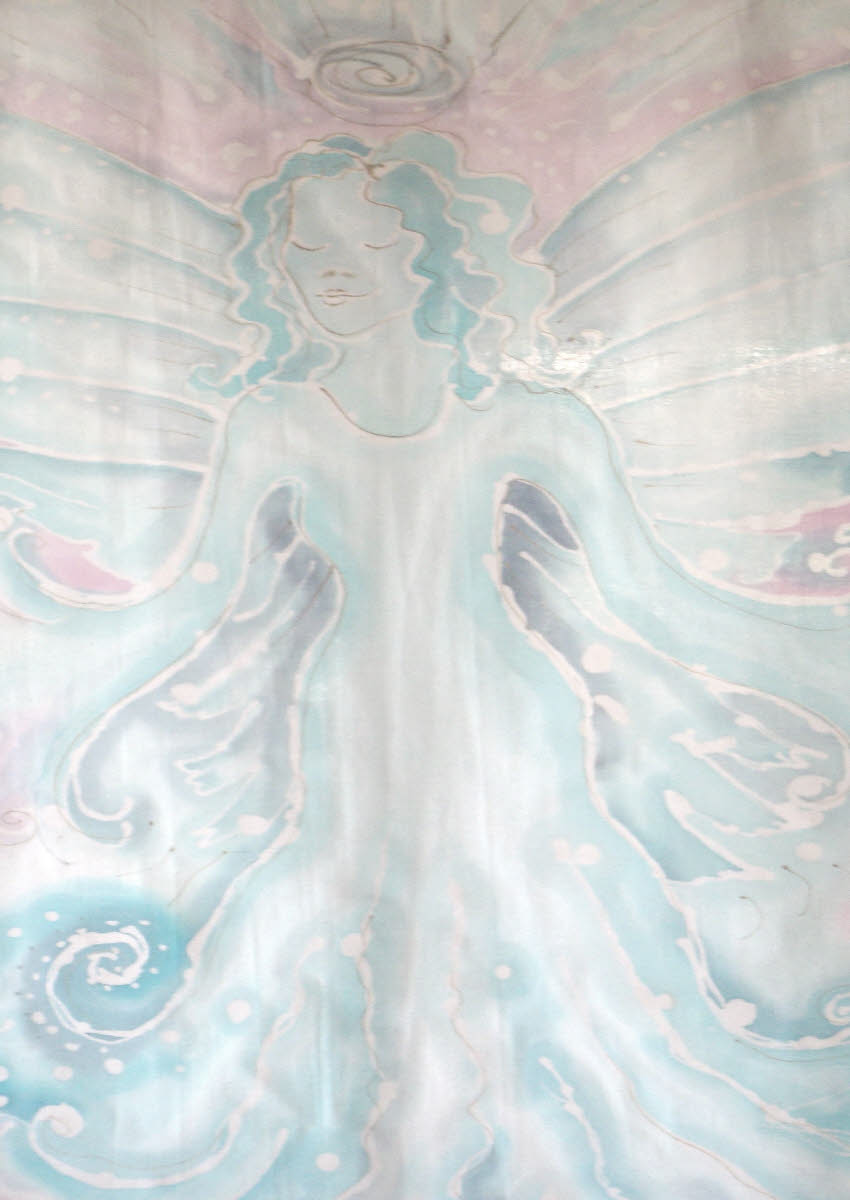 My sister, Jayne,  paints pictures of  people’s guardian angels that she channels.

Painting the light beings helps to anchor their light to Earth.

She usually get the name of the angel and the type of angel they are, angels of light, violet flame, peace, love etc.

The A4 pictures are £35 plus postage and packing.

A3 Batik hangings are £60 plus postage and packing

She also sells a set of 4 different Angel Greeting cards which are £3.50 plus postage and packing. 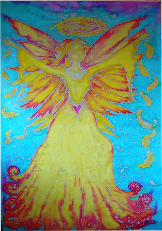 The main focus of Jayne’s Spiritual work and mission in this lifetime is to help people to clear Self -Punishment Reels.

A Reel is something that has been set up in a past life when people strayed into working with the Dark.

It often meant a misuse of power and a feeling of guilt at the end of the life, because suffering was caused to others, so people set up a Self- Punishment Reel. What they didn’t realise was that this then stayed with them.

It included the making of an Oath and a Vow which compounded the problem further.

Once an Oath or Vow is made, they are upheld by the High Self and by Angels and so stay in place over lifetimes until such a time when the person is helped to break them. This is what I am able to do working with Jesus, Archangel Michael, The Lords of Karma and the Holy Spirit. It forms the major part of my Spiritual work.

The process is deep, powerful and very effective, allowing the life to come up for clearing and enabling people to move forwards on their journey or life mission.

It takes around an hour and 15 minutes to do the process and the charge is £70.

During 2020 there has been a huge karmic shift and changes in planetary energies, which is set to continue. Many people have been coming forward to have their Reel cleared.

In recent months I have been shown that some deeper layers of clearing are needed for some people after their Reel has been cleared.  These include Oaths to work with the Dark Side and Pledges of Allegiance to the Dark, all made in past lives. (They are different lives to the Reel life)

I have been shown how to clear these if they present after a Reel clearing.

These processes take around 30 minutes, depending on how many Oaths have been made and the charge is £30.

Before any of these things are cleared for people, they must have their SRT clearing completed first by Debbie.

A Reel session clearing can be done on the phone or on Skype. Each session costs £70.